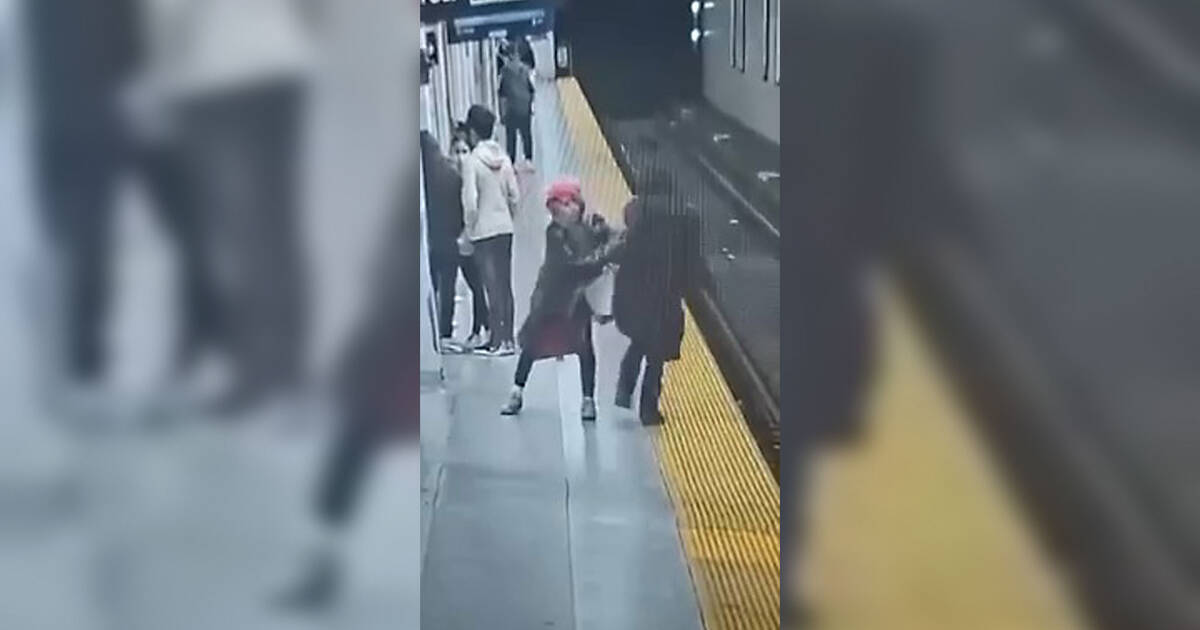 It sure feels like the TTC is experiencing a crime wave, and though there have been many horrifying incidents on Toronto’s public transit system in recent months, few stand out quite like a subway-pushing incident at Bloor-Yonge subway station last month.

That 39-year-old female victim may have walked away with her life, but that kind of experience has got to have a lasting impact on a person, and now, she is suing the TTC for $1 million in damages in a lawsuit claiming the transit agency is liable for the nearly-fatal attack.

In a video seen around the city, Shamsa Al-Balushi was shoved onto the tracks in the path of an oncoming train. The train was unable to stop in time, and Al-Balushi rolled under the lip of the platform, luckily avoiding serious injury. The assailant was eventually apprehended at Finch GO Station and charged with attempted murder.

Details of the lawsuit shared with blogTO reveal that Al-Balushi, represented by personal injury law firm Diamond and Diamond, is seeking “damages in the amount of $1 million or some other amount which will be provided prior to trial.”

This exclusive video obtained by blogTO shows the moment a woman was pushed onto the TTC subway tracks in Toronto on Sunday evening.

The victim suffered a broken rib in the incident.

Warning, this video could be hard to watch. #Toronto #TTC #Subway pic.twitter.com/kxtCv3M7Jf

The suit alleges that during the ordeal, Al-Balushi was “terrified,” “screaming in pain,” and “virtually immobile from her injuries” as the train narrowly rolled past her. She then allegedly had to wait approximately 30 minutes for assistance, with emergency services eventually taking the shaken victim to the emergency department of St. Michael’s Hospital.

It’s claimed that Shamsa suffered multiple injuries as a result of the incident, most notably broken ribs. In the weeks since the crime was committed, the victim claims to still suffer from ongoing injuries including ongoing back and neck pain, bruising and contusions to her entire body, and tearing/straining of muscles.

Along with these injuries, the plaintiff is claiming to suffer from emotional and psychological trauma, post-traumatic stress, anxiety and depression, insomnia, and a reduction in the activities and life she enjoyed prior to the ordeal.

Roughly three weeks before she was shoved in front of an oncoming subway train, Shamsa left her previous job for a new gig, and was still in her “probationary” period and not entitled to health benefits from her employer. Now claiming to be unable to perform basic household chores, the suit states that the plaintiff has required assistance with basic tasks.

In addition, the TTC is Shamsa’s only means of transportation, her legal team claiming that her continued reliance on the TTC “has substantially contributed to the deterioration of her mental health.”

And even though the assailant who pushed Shamsa was neither employed nor affiliated with the TTC, the suit claims that the transit agency is liable for the victim’s injuries.

It is alleged that the TTC failed to implement sufficient safety protocols, provide regular supervision of the passengers, adequate surveillance of the subway platform and supervision of commuters, and a lack of prompt response to the incident.

The suit also claims that the TTC failed to stop the subway train from continuing its approach to the platform, and failed to ensure that the victim was safe while emergency crews responded.

When pressed for a statement on the lawsuit, a spokesperson for the TTC told blogTO that “We don’t comment on ongoing legal matters.”