Toronto neighbourhood has had enough of seemingly endless break-ins 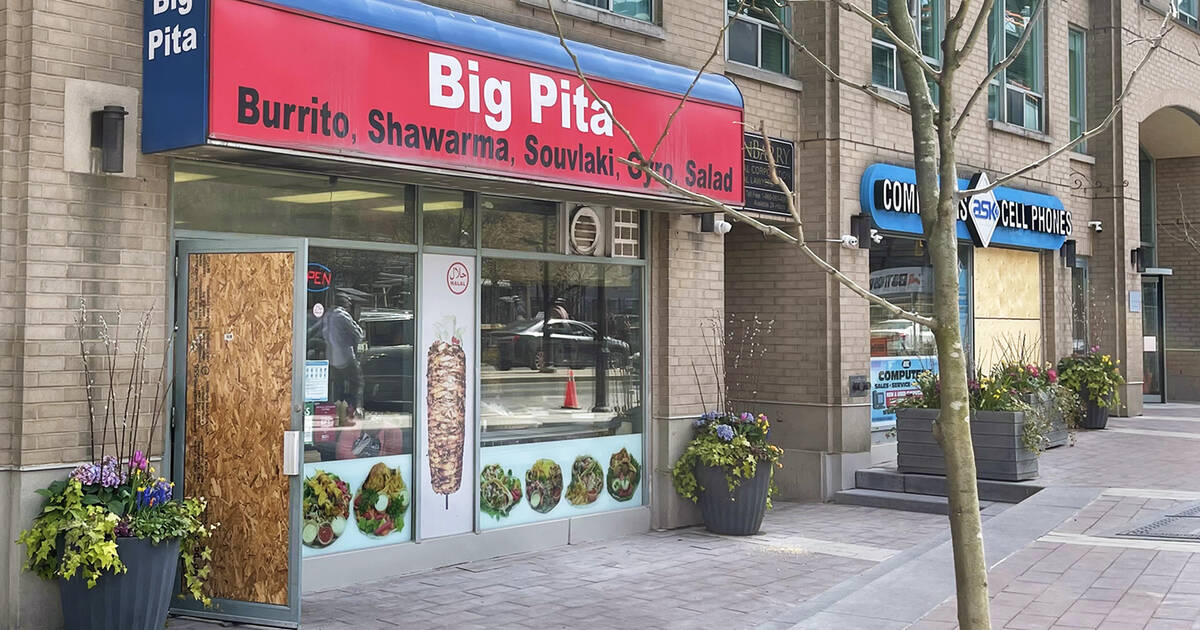 A Toronto neighbourhood known for being especially popular for visitors has been experiencing a rash of break-ins lately, with multiple condo buildings and local businesses having their windows smashed and items stolen, some of them more than once.

In recent weeks, storefronts including Big Pita, Tacorito, Urban Cova, Khao Hakka, ASK Computers, the Berkeley Cafe, a Gateway Newstands location, a Wild Wing, a Rexall, Shoppers Drug Mart, and the Firkin pub in the iconic flatiron building have been victims of such crimes in the area of King and Front Streets East and the Esplanade.

One restaurant on Market Street, Bindia Indian Bistro, has actually been hit a whopping six times lately, with expensive windows broken plus numerous iPads, a cash register, a computer, and tons of alcohol stock stolen.

“Businesses are already suffering so much [because of COVID], and this is just the cherry on the cake,” an employee on duty Tuesday tells blogTO.

“One of the times, workers installed a new door at 10:30 a.m. and by nighttime, it was broken into again.” 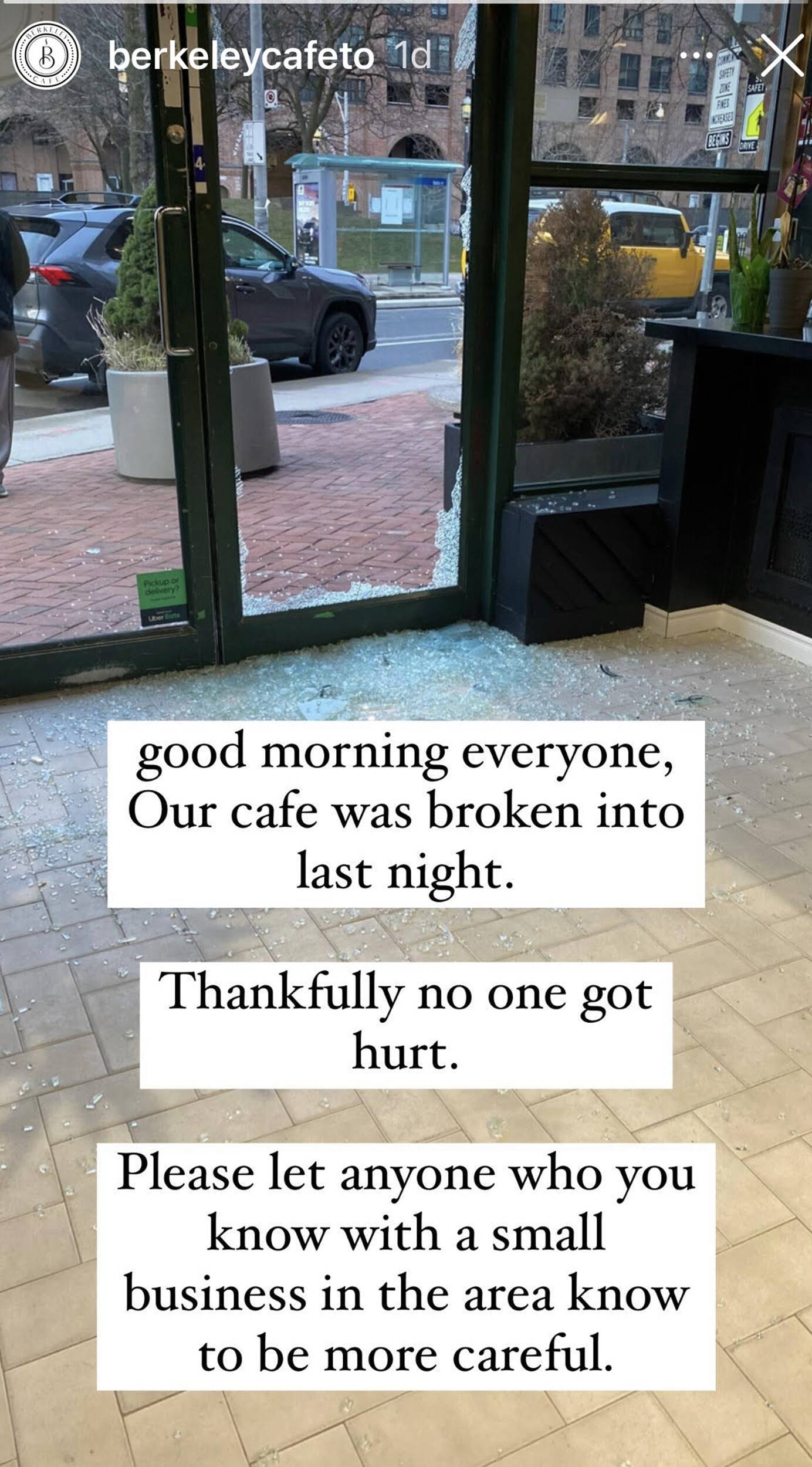 An Instagram story from Berkeley Cafe after they were broken into.

Though some stores have been lucky enough to have very little or nothing stolen — the Firkin cited only one bottle of Absolut vodka missing — the repairs often cost well over $1,000.

“It’s [a] real world class city that we’re living in,” sarcastically grumbled a representative of Big Pita who is clearly passionate about the subject.

He also mentioned that the store next door, which is the aforementioned ASK Computers, likewise had a brick thrown through their window just days before his own workplace was stricken. The ongoing issue has also caused a ton of chatter on community Facebook groups, where photos and accounts of the crimes have been shared.

While some have been quick to blame the Novotel at Esplanade and Church St., which has been used to house homeless residents, others assert that assuming the acts are committed by homeless people is offensive.

Still others say that it’s been more of a long-term issue than a recent one, but all agree that something has to be done, as the incidents seem near-nightly at this point. 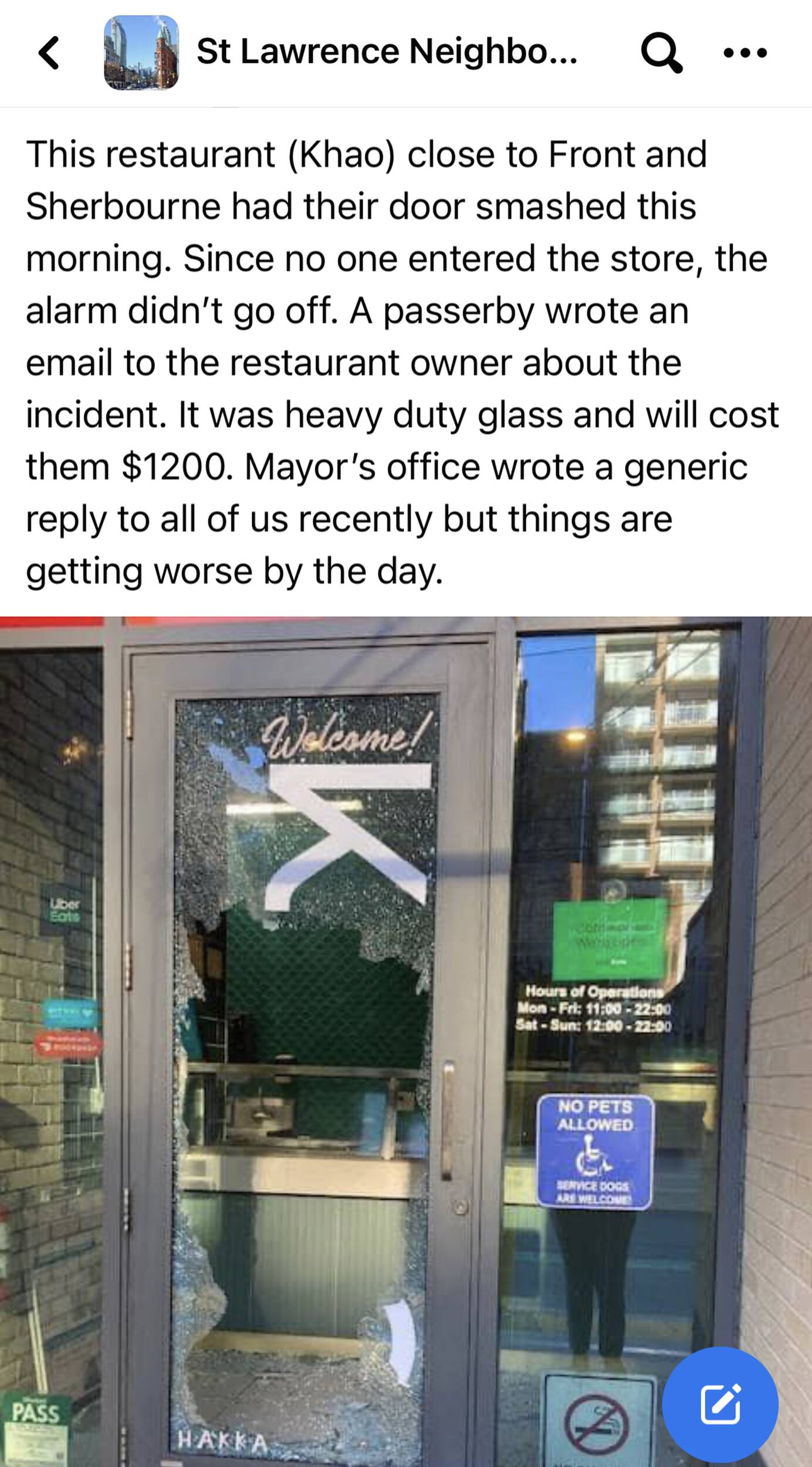 One of many posts about recent window smashings in the area, as shared to a private community Facebook group and sent to blogTO by a member.

At least one petition oppositng the shelter and deeming it a threat to local safety has arisen, also claiming hygiene issues, increased drug use and assaults in the area.

“I’m signing because I’ve witnessed the repeated smashing of store windows surrounding my residence. I’ve also listened to the common late night screaming outside my windows for the last year & a half,” one signer wrote.

“I have lived next door to the Hotel for close to 15 years. The last 2 years have been a nightmare,” another added, mentioning “the horrible state of the area,” daily shouting and regular visits by emergency responders.

“This needs to stop. We need our community back. The shelter has damaged the reputation of the St Lawrence Market area. I want to feel safe again in my neighbourhood.” 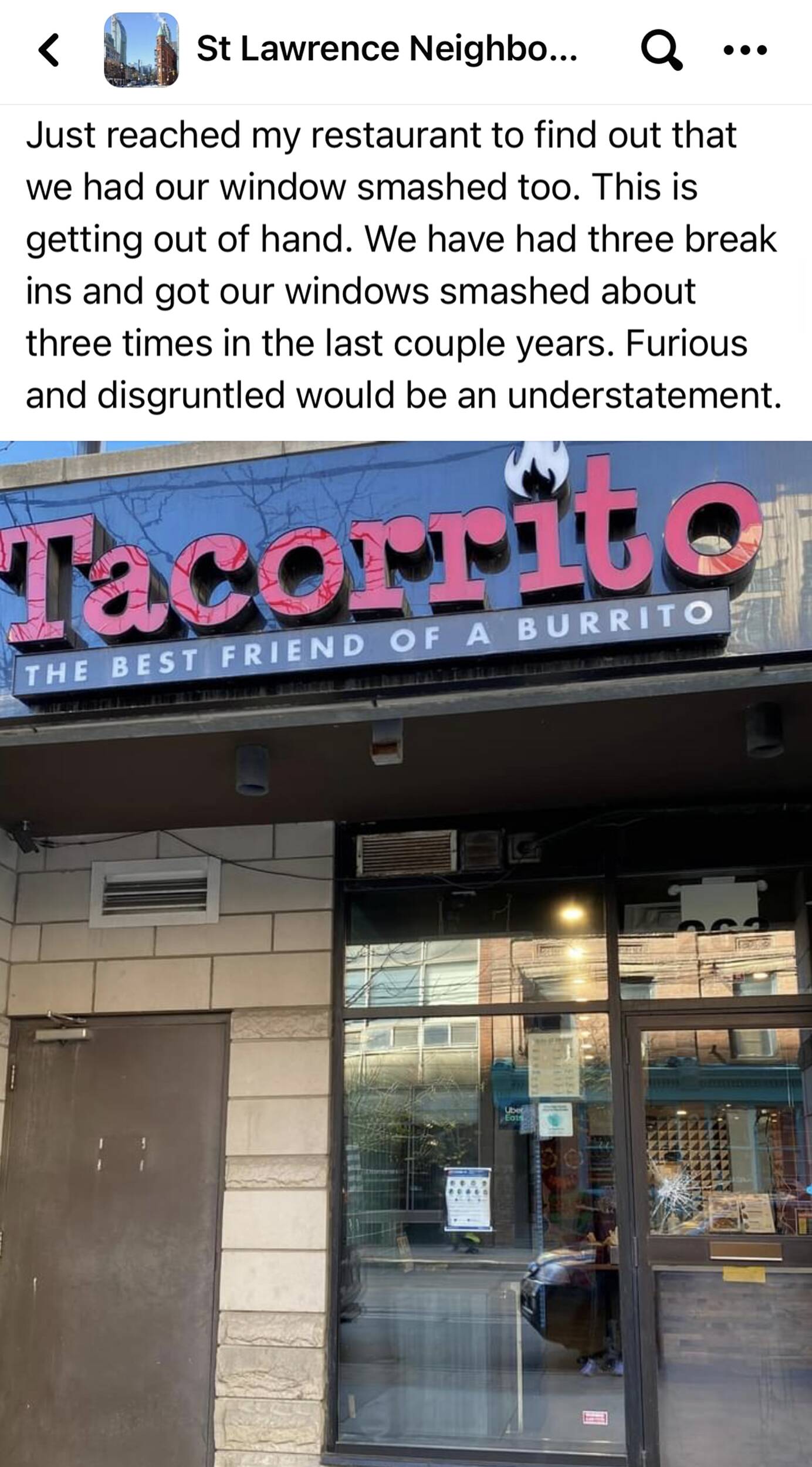 Another of many posts about recent window smashings in the area, as shared to a private community Facebook group and sent to blogTO by a member.

Residents of the area have been expressing their displeasure for months, but the lease for the much-needed shelter space was recently extended to December 2022, with the possibility to do so again until April 2023 “if needed.”

Midtown residents had similar concerns in summer 2020, going as far as marching in the street to protest nearby shelters they said were hastily set up and were causing safety concerns.

And, residents of Liberty Village likewise blamed the St. Felix respite centre for a rise in break-ins a few months later.

“What is sad and difficult is that many times people just want an immediate solution to their concerns without understanding that the situation is complex,” Enrique Cochegrus, St. Felix’s director of communications at the time, told blogTO.

“We understand concerns about incidents that are a possible consequence of our residents [and] do our best to constantly take actions to mitigate impacts on the community… The real problem is poverty — it’s not the people, the people are not the problem.” 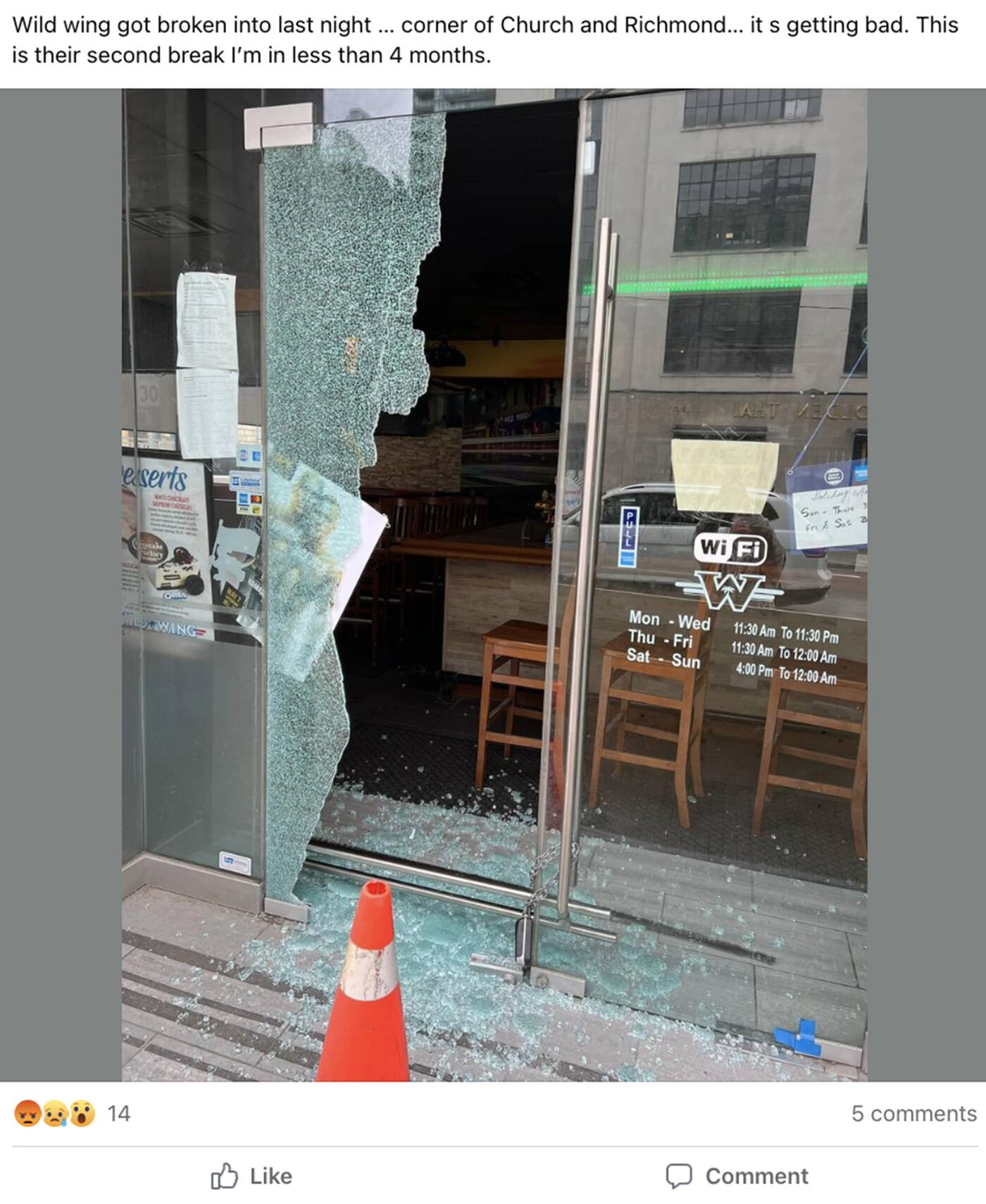 Multiple neighbourhood Facebook groups are filled with such posts about break-ins at bars, restaurants, retail stores and even condo buildings.

Toronto police did not provide comment by the time of publication, though they appear to be responding to the crimes in general when called. The mayor’s office is likewise following up with the authorities.

“We’ve heard directly from residents about recent break-ins and vandalism in the St. Lawrence Market area. Vandalism and theft anywhere in our city are unacceptable,” a representative from the Mayor John Tory’s office tells blogTO.

“Police confirmed to our office that they are aware of these incidents and as part of their response they are placing additional resources in the area. We understand that 51 Division is also working with local business owners to help address some similar concerns. While the Mayor cannot direct the police he has been assured that they are doing everything possible to support local residents and business owners and to ensure they remain safe.”