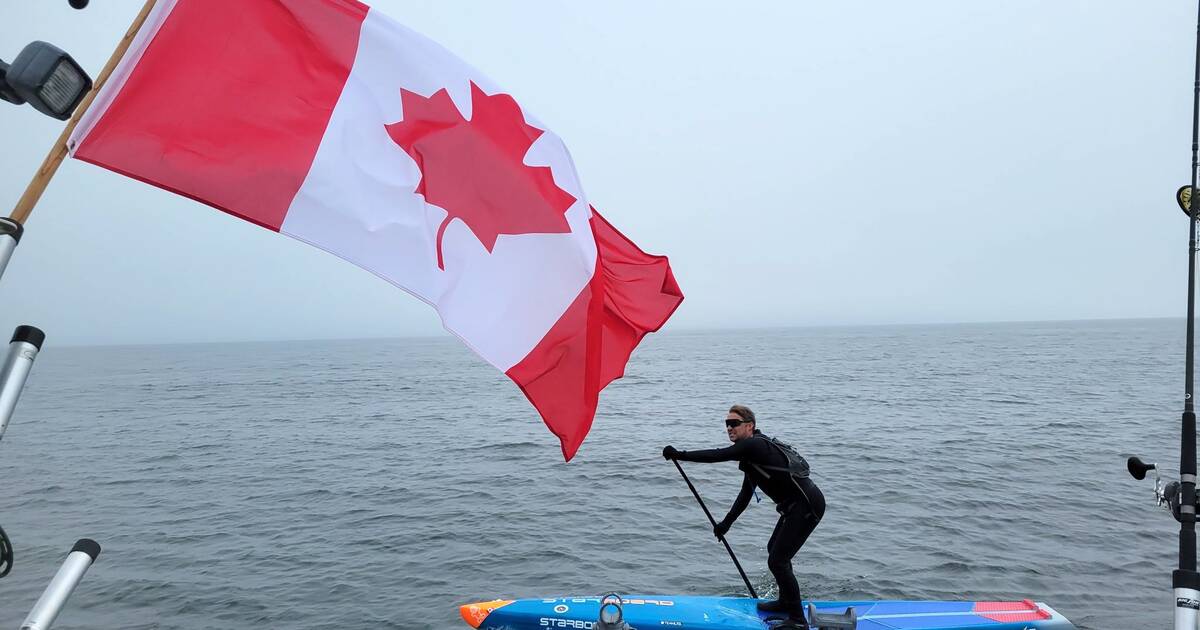 A Toronto man is just one paddle board trip away from completing a momentous journey in aims of raising money for mental health services and awareness.

In a couple days Michael Shoreman will depart Youngstown, New York by paddle board and cross Lake Ontario, arriving at Toronto’s HTO Park on Aug. 20.

If he is successful, Shoreman will become the first person with disabilities to cross all the Great Lakes by paddle board.

But why would someone put themselves through such gruelling task?

For Shoreman, it’s to ensure no young person dealing with mental health issues has to do it alone.

I made it Canada. Today I became the first athlete with disabilities to cross Lake Superior from Wisconsin to Minnesota, in a time of 8 hrs 17 mins in my 3rd Great Lake Crossing in my run at crossing all 5 Great Lakes raising funds for kids across the country. 🇨🇦

I am so tired pic.twitter.com/yLvvUMleq0

Prior to 2018, Shoreman was a paddle boarding coach and had his own business teaching people how to master the craft out of Cherry Beach.

But soon after Shoreman was diagnosed with a very severe case Ramsay Hunts syndrome (just like Justin Bieber and Olivia Chow) and developed a number of debilitating side effects like vision loss, speech loss and chronic vertigo.

Shoreman was told he would never be able to paddle board again and took an entire year to re-learn walking.

During that period he ended up having a major breakdown and realized that he “felt very alone” in this mental health journey.

Three years later after mental health treatment, he’s come out on the other side and wants to ensure nobody experiences these kinds of events by themselves.

“I don’t want young people to feel that, and I don’t want kids to ever felt like I felt and to get to that crisis stage I was in,” he said.

After years of rehabilitation work, Shoreman is back on his paddle board with a goal in sight – to raise $100,000 for youth mental resources, with backings from Jack.org.

Coach Jonathan and I doing a site location of the Lake Ontario landing at HTO Park and also letting go of some bad feelings from last years attempt. This is where it will arrive. One 20 hour crossing to go. ✅️ pic.twitter.com/kgplPD4OE9

To achieve this monstorous goal, Shoreman has devoted himself to crossing every Great Lake by paddle board – and just one more stands in his way.

Since May he has successfully crossed Lake Erie, Lake Huron, Lake Superior and Lake Michigan, often times throughout the darkness of the night.

“I can’t believe I made it this far, it’s a lot of work, I’m very tired at this point. They are gruelling,” Shoreman said, as he looks forward to his very last crossing.

I think it just hit me that Im about to become the first person with disabilities to cross all five Great Lakes for young Canadians across the country. 🇨🇦 pic.twitter.com/Lc4BRZw4IO

It took him 28 straight draining hours to cross Lake Huron and 30 to cross Lake Michigan. Half of the journey Shoreman is standing on the board and the other half he is sitting, though he often experiences physical pain to his legs, feet and arms.

Once he takes off, Shoreman does not stop – except for a 30 second break every 30 minutes to drink a protein shake, handed to him by his team who follows behind on a boat.

In two weeks I will attempt crossing Marilyn Bell’s 1954 route into HTO Park in the Toronto harbour, attempting to become the first person with disabilities to cross all five Great Lakes back to back. The path home to Toronto has now been charted. 🇨🇦 pic.twitter.com/Ev9hillltZ

Throughout his four other successful (but exhausting) journeys, Shoreman says he’s learned how to deal with the sun, quick weather changes and going to the bathroom.

Of course, he isn’t out there completely alone. Shoreman is backed by an entire crew of boat captains, emotional support people and safety persons. He says they help him to concentrate and focus.

“My team is constantly taking naps and shifts so they can come to the side of the boat and talk to me so they can make sure I’m alert.”

Inspiring to see @MikeShoreman progress on his pursuit to become the first person with a physical disability to cross the five great lakes to raise funds for @Jackdotorg – supporting youth mental health.

Toronto is cheering you on, Mike! https://t.co/KI2OoOVkN4

He’s gotten used to seeing hallucinations and experiencing major sleep deprivations as a result form the strain on his body. Sometimes he even dozes off while still paddling.

“When the sun goes down and the water goes from beautiful blue to black [it’s] very lonely and isolating,” he said.

Since embarking on this challenge, Shoreman said he’s learned to not take on every task in his life alone and credits his team for their immense support. There is no doubt he’s become mentally and physically stronger.

“You just go into these kinds of things and push through as much as you can. I’m really excited that I made it this far but I was really reliant on my team, safety support, captains and people who talk to me. I think I’ve learned to maybe not take on everything myself.”

Shoreman’s final journey across Lake Ontario will take him around 20 hours. There is no guarantee he will make it successfully but either way, he looks at it as an opportunity to help others.

Don’t usually show pictures of me half dead but this is me at 6 am Wednesday after going for 25 hours with my eyes 2/3 closed, taking 15 second naps on Lake Michigan through the night. Thanks to my team for talking to me all night to keep me alert as possible. pic.twitter.com/FYhtN96QYx

This last paddle might be a bit more intimdating than the other four, as Shoreman attempted this exact same trip last year but could not complete it in full.

The Toronto Port Authority has now signed off on my arrival through the Toronto harbour into HTO Park should I make it this time, becoming the first person with disabilities to cross all five Great Lakes. Whoah. pic.twitter.com/g43GK0nzsk

Donations to the Canada’s Great Lakes Crossing 2020 can be made at Jack.org. There will be crowds awaiting Shoreman’s arrival at HTO park on Aug. 20 and the public is invited.

Best of luck to you Michael, we are cheering you on!