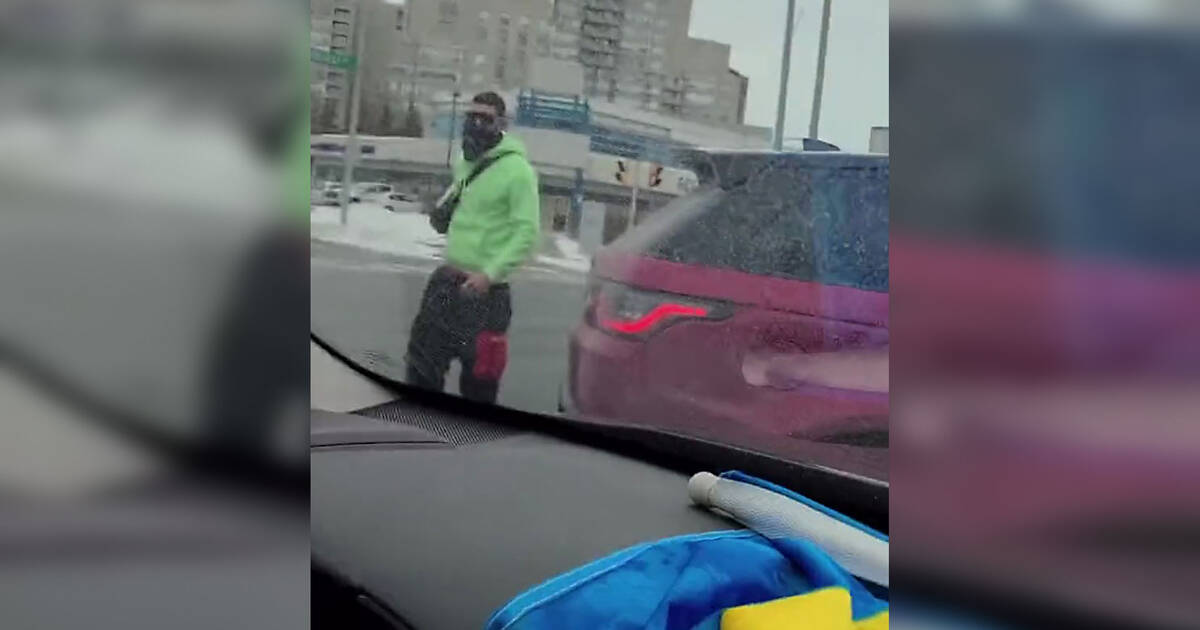 The war in Ukraine is thousands of kilometres away, but the fallout of the conflict has spread across the globe, including right here in Toronto.

It’s already manifested in ugly ways like hateful graffiti and conspiracy-fuelled misinformation in and around the city, and things took a shocking turn for the worse over the weekend in an incident that left a Ukrainian-Canadian family shaken.

A video has emerged showing a confrontation — which many on Twitter are calling a blatant hate crime — just beyond Toronto’s northern edge, where a man randomly assaulted a Ukrainian family who proudly displayed their threatened nation’s flag on the car dashboard.

The video circulating shows a maroon SUV pulling up in front of the family at a yellow light on Bathurst north of Steeles, presumably to cut them off from escape. Using what appears to be a Russian flag, he then begins slamming against the rear driver-side window — where a young child is clearly seated — at which point the father exits the vehicle to intervene, and the assailant drives away at high speed.

A photo of the aftermath reveals a shattered rear window.

The child sitting next to the shattered window suffered minor scratches from the assault, but her confused cries as an aggressive adult slams on the window add to a genuinely heartwrenching scene.

I talked with the father of the kid. Kid is safe with little scratches on face because of shattered glasses. ❤️

With the whole assault recorded on video, license plate and all, the man was arrested by York Regional Police later on.

York Regional Police issued a statement on Monday afternoon, stating that officers responded to a report of a road rage incident on Sunday evening.

A media release says that “officers also learned that the suspect may be involved in at least one other incident in the City of Toronto. The motivation for the Saturday incident is still under investigation as the suspect is not of Eastern European descent and suffers from a significant mental health issue. He will not be named for this reason.”

The Bathurst and Steeles area is known as an enclave for Russian-speaking Toronto (and Vaughan) residents, though that doesn’t necessarily mean that the plurality of residents support Putin’s aggression. One area resident told the CBC, “We feel very sorry and ashamed of the actions that Putin is taking in Ukraine.”