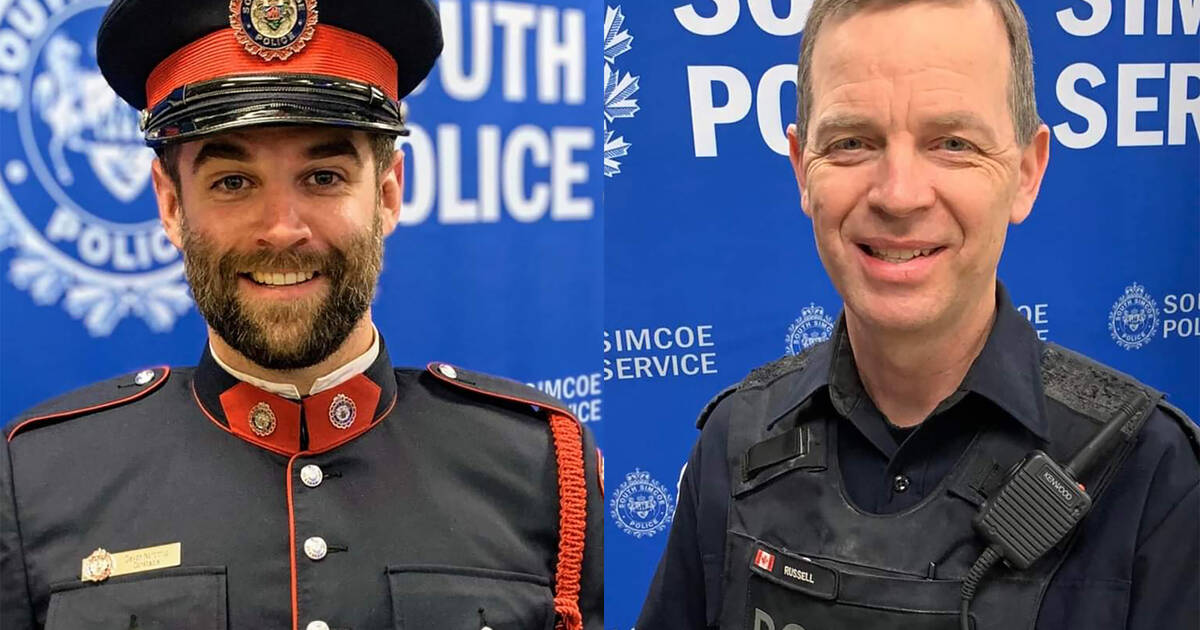 Two Ontario police officers who lost their lives in the line of duty at an Innisful home on Tuesday night have been identified, simultaneously turning both men into heroes, as well as the Greater Toronto Area’s latest high-profile shooting fatalities.

The South Simcoe Police Service announced during a press conference early Wednesday afternoon that Const. Morgan Russell, 45, and Const. Devon Northrup, 33 had fallen victim to their injuries after exchanging gunfire with a 23-year-old male suspect.

The suspect, who was pronounced dead at the scene, has not been named. Ontario’s Special Investigations Unit is currently investigating the circumstances of his death and are expected to reveal more information as available.

“The man’s autopsy is scheduled for Friday. Till that time, the investigation is ongoing,” said SIU Spokesperson Kristy Denette during Wednesday’s presser, noting that a firearm belonging to the suspect was collected at the scene.

“This is a heartbreaking time for our police service, the families impacted, our emergency services personnel and our communities. Our immediate focus is to support our members and their grieving families,” said South Simcoe Police Chief John Van Dyke when speaking to reporters on Wednesday.

“We ask for your patience and privacy as we attempt to come to terms with the loss of these two beloved members of our family.”

Van Dyke explained that it was the younger officer, Northrup, a six-year veteran of the force, who first succumbed to his injuries at a hospital in Barrie following the shooting.

Northrup was a member of the service’s Mental health Crisis Outreach and Support Team, the Emergency Response Unit and the Community Mobilization and Engagement Unit. Van Dyke said that he is survived by his partner, parents and many friends.

Russell, a 33-year veteran of the force, is survived by his wife and two teenaged children, according to Van Dyke. He was a trained crisis negotiator and a former classmate of the somber police chief’s.

Like his colleague, Russell was fatally wounded during the shooting at a home near 25th Sideroad and 9th Line in Innisfil just before 8 p.m. on Tuesday night.

While both were rushed to hospital in Barrie, Russell was eventually airlifted to a trauma centre in downtown Toronto. He succumbed to his injuries a short time later at Toronto’s St. Michael’s Hospital.

“This is personal for me. I went to police college with Morgan 33 years ago,” said Van Dyke when announcing the father-of-two’s death.

The news of these two officers dying in the line of duty comes less than a month after 48-year-old Toronto Police Constable Andrew Hong was fatally shot at a Mississauga Tim Hortons on Sept. 12.

“I’m heartbroken to learn that two South Simcoe Police officers were killed in the line of duty,” said Ontario Premier Doug Ford in a statement on Wednesday.

“We are praying for the officers’ families and all the police officers who put their lives on the line to protect our communities.”

“I’m sending my deepest condolences to South Simcoe Police this morning, as they mourn the passing of two officers who were killed in the line of duty,” said Canadian Prime Minister Justin Trudeau similarly.

“My thoughts are also with the loved ones of these officers and the entire Innisfil community.”