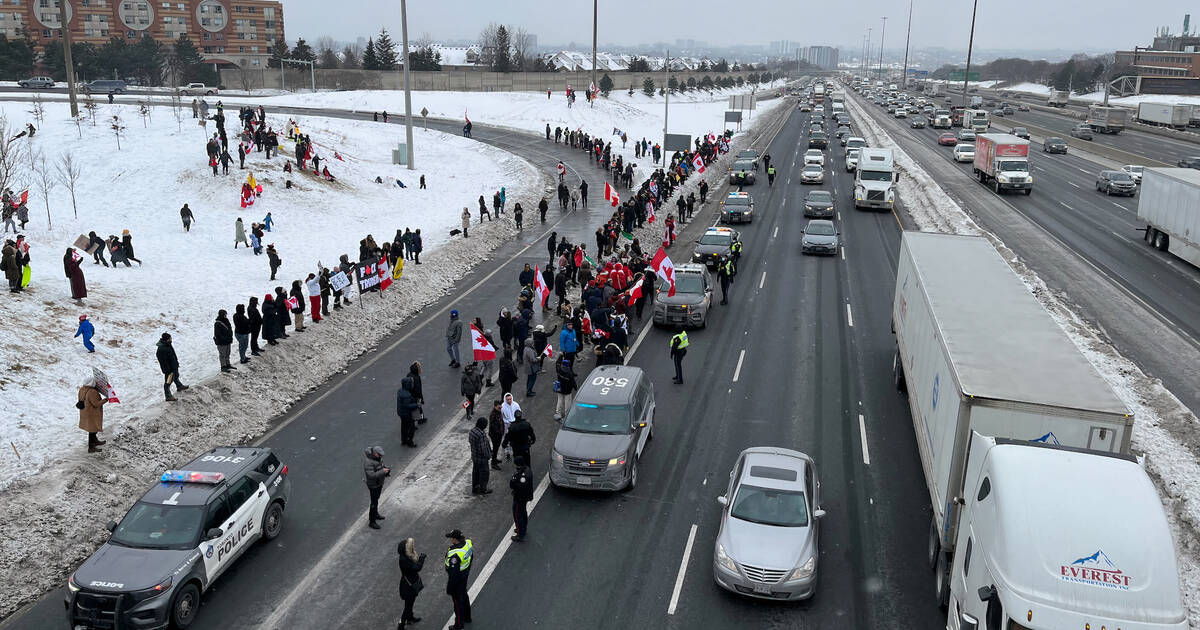 Ottawa residents have been subjected to a difficult week of disruption, traffic, noise pollution, violence and vandalism as a result of the so-called “Freedom convoy” that has been occupying the downtown core for days, and rumours that a similar protest is headed for Toronto this weekend are circulating.

While protestors in Ottawa have vowed to remain around Parliament Hill until vaccine mandates and public health restrictions are lifted, something Prime Minister Trudeau has made clear won’t be happening under any circumstances, a “Convoy for Freedom Toronto” poster is now being shared online.

It calls for truckers and individuals to meet at a number of locations throughout southern Ontario Sunday, with the final meetup called for Queen’s Park in Toronto at noon.

How will Toronto handle this protest compared to Ottawa?

And while there’s no confirmation of who or how many people are actually planning to partake in the demonstration, Queen’s Park is nevertheless preparing. According to CityNews, workers were seen using forklifts to place large concrete planters at the entrances and exits of the parking lot at Queen’s Park on Tuesday to prevent cars from entering.

In a Breakfast Television interview Wednesday morning, Mayor John Tory said the city is prepared for the possibility of an impending demonstration.

“The police are always on top of these things,”he said. “They have advance intelligence.”

On @breakfasttv this morning, Toronto Mayor @johntory was asked about possibility anti-Trudeau/democracy protesters will invade the city this weekend ….

Tory noted that “there is no place for spewing hate” when it comes to protesting, adding that he hopes protestors can use common sense, be considerate of the rights of others and respect the fact that hate symbols of any kind are not welcome in Toronto.

But if it’s anything like what Ottawa has seen over the past week, Toronto’s protest won’t likely be free of hate symbols or individuals with no concern for how their actions are impacting others.

In just a few days, the demonstration in Ottawa has seen protestors harrassing workers at a homeless shelter and demanding free food, flying confederate flags and flags with swastikas, dancing on the tomb of an unknown soldier, urinating on the National War Memorial, assaulting a homeless person and more.

This is the audio landscape in a residential area of downtown Ottawa this morning. pic.twitter.com/Ol2Gk5XOry

With this in mind, some residents are taking to Twitter to express that these kinds of actions are not welcome in Toronto.

A convoy is threatening to attack my city Toronto this Saturday. Keep the Nazi flags, Confederate flags and Trump flags at home! I don’t want to see that shit in my city! #FluTruxKlan #KarenConvoy #GoHome

Some are also pleading with the city to ensure hospital row is protected from disruption.

There are rumors a Truck Convoy will be in Toronto by weekend if not before. We call on all levels of police to protect ahead of time HOSPITAL ROW/UNIVERSITY AVE and prevent it from disruption PLEASE. pic.twitter.com/j5CbvSpmoi

As countless business are forced to remain closed in downtown Ottawa— causing them to face even more financial precarity on top of what the pandemic has already brought — while Ottawa residents continue to be inconvenienced and afraid, people in Toronto are merely hoping this protest, if it comes, won’t wreak the same level of havoc in the city as it has in the country’s capital.