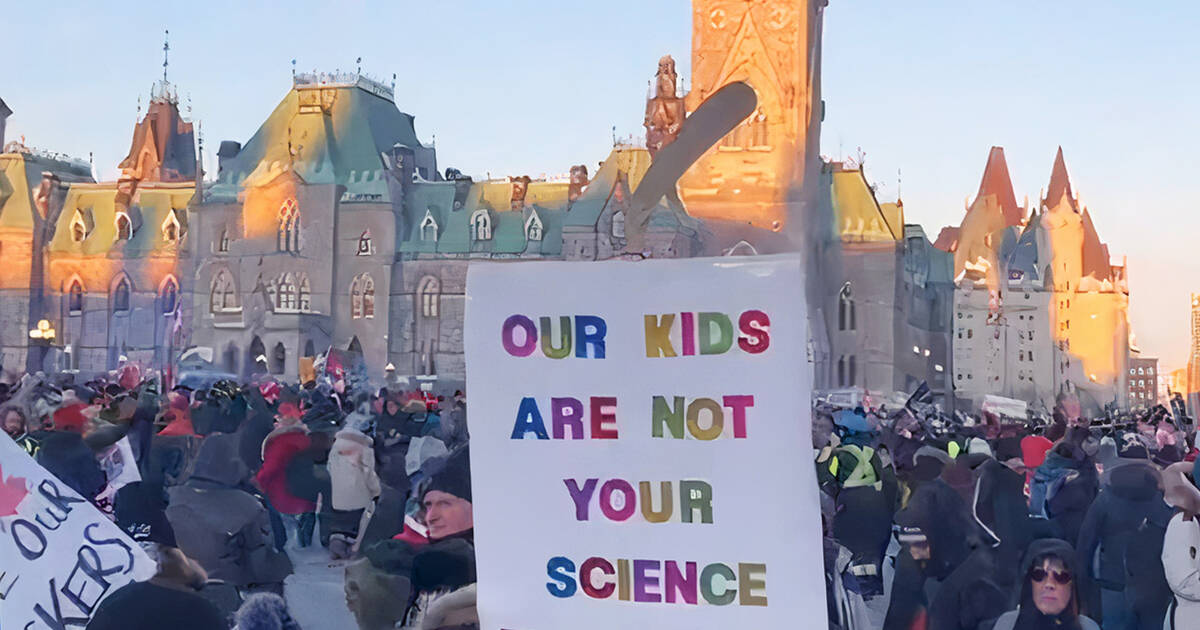 Though Ottawa police say they hope to have the city mostly back to normal in the next few days, “freedom convoy” protesters continue to occupy the city, urinating on lawns and war monuments, harassing people at homeless shelters and demonstrating on Parliament Hill.

Traffic is completely snarled in the city, honking abounds, businesses are closed and residents are being urged to stay home, and from their homes they are taking to social media to complain about the throngs that have overtaken the city.

Trending in recent days have been tags like #FluTruxKlan — a nod to the white supremacist figures taking part in the movement — and #KarenKonvoy. On Monday, yet another popped up on socials, its ethos pretty obvious: #GoHome.

Support this picture / “convoy”?
This conversation is now over.

What’s happening in #Ottawa is beyond not ok. This is no longer about “freedom”. #GoHome pic.twitter.com/gD3GGuoo72

Citizens of Ottawa, tired as they are of the days of disruptions, are understandably demanding that ralliers leave the city in peace as Prime Minister Justin Trudeau continues to stand his ground.

“I want to be very clear: We are not intimidated by those who hurl insults and abuse small business workers and steal food from the homeless,” Trudeau said at a press conference on Monday, referencing some of the “shocking and disgusting” behaviour witnessed from convoy members in recent days.

“We won’t give in to those who fly racist flags. We won’t cave to those who engage in vandalism or dishonour the memory of our veterans.”

You know which truckers I’m cheering on today? The ones traveling our roads making deliveries and keeping our shelves stocked. The ones at work are in my thoughts, not the crybabies in Ottawa. #GoHome

He also said “it has to stop,” and has not been swayed to change his stance on vaccine mandates or other COVID-19 restrictions — which are created and enforced by each respective province’s leadership, not at the federal level.

Still, the convoy has made it clear it plans to stay in the city and protest until all pandemic restrictions are lifted.

Premier Doug Ford, whose team is the ones Ontario truckers should be aiming their ire at if they want to protest public health measures, likewise condemned some of the conduct taking place in the capital city, though not the convoy itself in concept, as he too has stated many times he hates lockdowns more than anyone.

“The right to peaceful protest is core to our Canadian identity. I was extremely disturbed, however, to see some individuals desecrate our most sacred monuments and wave swastikas and other symbols of hate and intolerance this weekend. That has no place in Ontario or Canada. Not Now. Not ever,” he said in a statement Monday.

“Today, Ontario is beginning to ease some public health measures, the first step in returning to normal. All Ontarians are united in their desire to put this pandemic behind us and return to the life we knew before COVID-19.”

Patriotic Canadians do not hold a city hostage, abusing, harming and costing its’ residents and businesses, b/c they’re pissed off at something political. This is so wrong. 10% do not dictate to the 90% acting democratically. #GoHome #CriminalsAndTerrorists https://t.co/gdbkeGai7N

The prime minister and his family are being kept at a secret location for their safety, Trudeau saying that he is not meeting to discuss anything with anyone involved.

“I have chosen to not go anywhere near protests that have expressed hateful rhetoric, violence toward fellow citizens, and a disrespect not just of science, but of the frontline health workers and quite frankly, the 90 per cent of truckers who have been doing the right thing to keep Canadians safe, to put food on our tables,” said the PM.