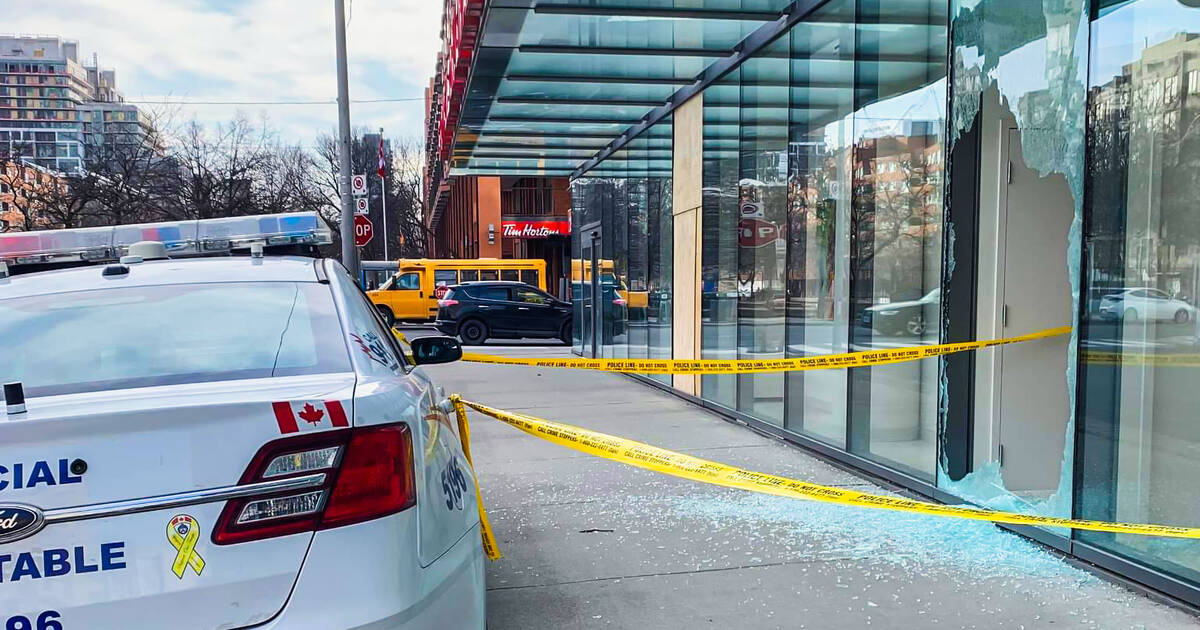 A recent spate of break-ins has been a pressing problem for one of Toronto’s most lively retail and restaurant districts, leaving several storefronts littered with broken glass as windows are smashed and goods are stolen.

But residents and business owners in the St. Lawrence Market area can breathe just a bit easier today as cops have announced the arrest of a suspect alleged to be at least one of those responsible for the rash of storefronts suffering shattered windows and stolen items.

It’s a crime wave that has resulted in damage to a long list of storefronts in the area of King and Front Streets East and the Esplanade that includes the Firkin pub in the iconic landmark Gooderham Building, along with many others including Big Pita, Tacorrito, Urban Cova, Khao Hakka, ASK Computers, the Berkeley Cafe, a Gateway Newstands location, a Wild Wing, a Rexall, and a Shoppers Drug Mart location.

On Tuesday evening, Toronto Police announced the arrest of one suspect in the case, taken into custody on Sunday just after 11 p.m. in The Esplanade and George Street area and charged with break and enter with intent, break and enter commit, and possession of property obtained by crime.

Cops allege that the man unsuccessfully attempted to smash a storefront window with a rock in the early morning hours of May 5 in the Sherbourne and Front Area. After failing to breach the store on his first attempt, the man returned on Sunday morning and allegedly broke through the front door, entering the business and stealing alcohol.

Ian Cochran, 63, of no fixed address appeared in court virtually on Monday.

Some in the area have been quick to lay blame for the break-ins on the nearby emergency shelter hotel at Esplanade and Church, even creating a petition opposing the continued use of the former Novotel as a shelter.

The alleged window smasher’s ‘no fixed address’ could be read as a confirmation that the suspect is a resident of the nearby shelter, though as with other cases of Toronto neighbourhoods pushing back against homeless shelters and respite centres, advocates have stressed that the underlying issue here is poverty.

Seeing a suspect off the streets is likely little consolation for some of the businesses in the area, like Bindia Indian Bistro on Market Street, which has been hit six times in recent months, costing the restaurant several iPads, a cash register, a computer, and a whole lot of alcohol.

Cops are asking anyone who may have further information about the case to step forward, and have increased patrols in the area to deter further break-ins. They suggest business owners leave money tills open with no cash visible and remove point of sale systems and tablets to discourage break-ins.