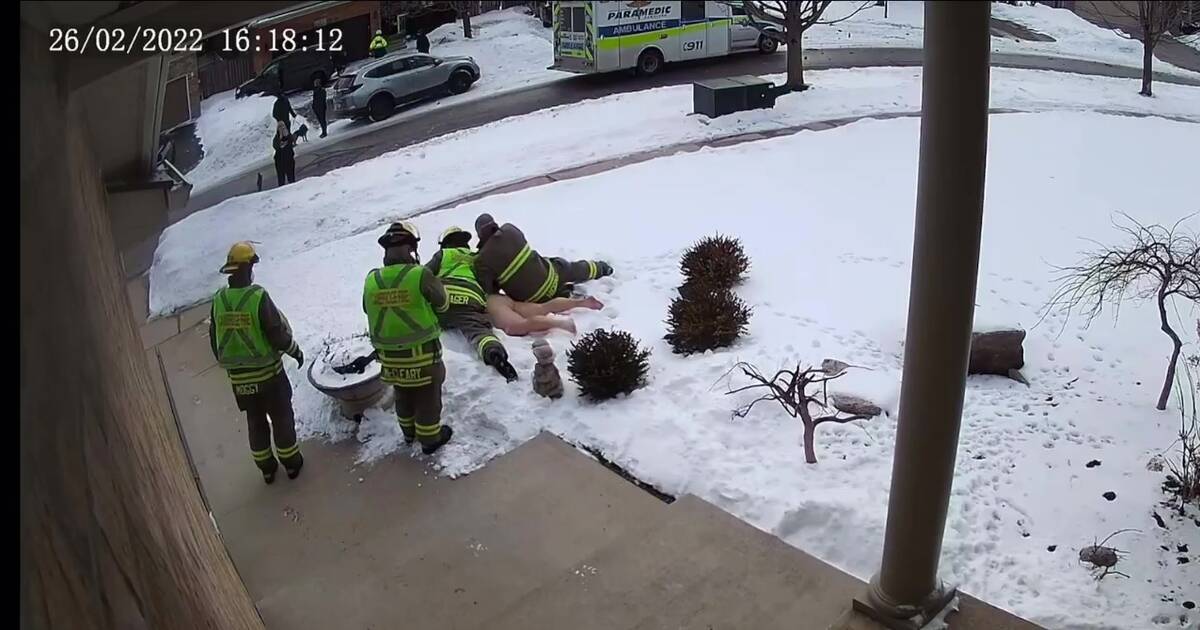 A wild video has emerged out of Cambridge, Ontario, showing four minutes of complete chaos beginning with a two-car collision and concluding with a confused naked man pinned junk-down in the snow by firefighters.

The incident occurred on Saturday in the area of Jamieson Parkway and Lardner Street, captured by a Hespeler man’s home security system. The nature of the impact becomes a bit clearer when a completely naked dude emerges from the white Volkswagen Tiguan SUV, fumbling to cover himself with a towel as he stumbles dazed from the scene.

And if you can believe it, the situation only got stranger from there.

The man who owns the home where the video was recorded, and who wishes to remain anonymous, says that “the Dodge driver was going at the normal rate of speed, then the Tiguan decided that was way too slow.”

After stumbling out of range of the camera, the dazed man reportedly went to the pub across the street, where he “barged into the kitchen and broke some stuff, then was brought back by a kind human.”

The video resumes a few minutes later when EMS crews arrive on the scene. The naked man can then be seen emerging from the vehicle of the assisting bystander and, clearly in distress, ditches the towel and walks right back into his damaged car, attempting to drive off.

More bystanders then cooperate to recapture the man, one woman attempting to hop in the vehicle and remove the man, and other cars working together to box in the damaged SUV.

His vehicular escape attempt thwarted, the nude escapee continued his run on foot. But instead of distancing himself from the crime scene, he ran right back to familiar territory — a pretty clear sign that this man was in need of medical or mental health assistance.

In another escalation of the situation, the man then sprints up and down the street before entering the garage of the camera-equipped home. He attempts to sit in a car in the garage, which is locked, then rings the house’s doorbell and gains entry, where chaos ensues.

All we have is audio and confused onlookers for the portion where the man enters the home, but the person who shared the video says that the man tackled his mother, “knocking her to the hardwood floor pretty hard. Lily, my dog, was in her hands as she was going nuts with the flashing lights and emergency vehicles outside.”

The man then fled to the living room “in an attempt to break out of the giant window. He bounced off the glass and then my dad caught up to him, pinned him to the ground, then the firefighters dragged him out of my house.”

It was a harrowing ordeal for the family, the video owner claiming that “by the end of it, basically the entire police force was at my house, 8-9 cruisers that I saw but there were apparently more blocking the streets. Three ambulances, eventually a fourth. Four firetrucks with full squads.”

The mother was taken away on a stretcher and observed in hospital for just over 24 hours, the son saying that she suffered “a minor concussion it seems along with muscle injuries to her legs and arm. Overall she will be okay and is on bed rest for the next while. She can’t walk on her own at the moment, but we have an amazing physio and massage therapist coming in daily.”

The Waterloo Regional Police Service says the driver of the grey Dodge involved in the crash was transported to a local hospital with non-life-threatening injuries.

As for the fate of the arrested 40-year-old man, police say “the male driver of the Volkswagen was transported by Region of Waterloo Paramedics to a local hospital for treatment and was held for a bail hearing.”