A woman has been snowkiting on Toronto's frozen waterfront 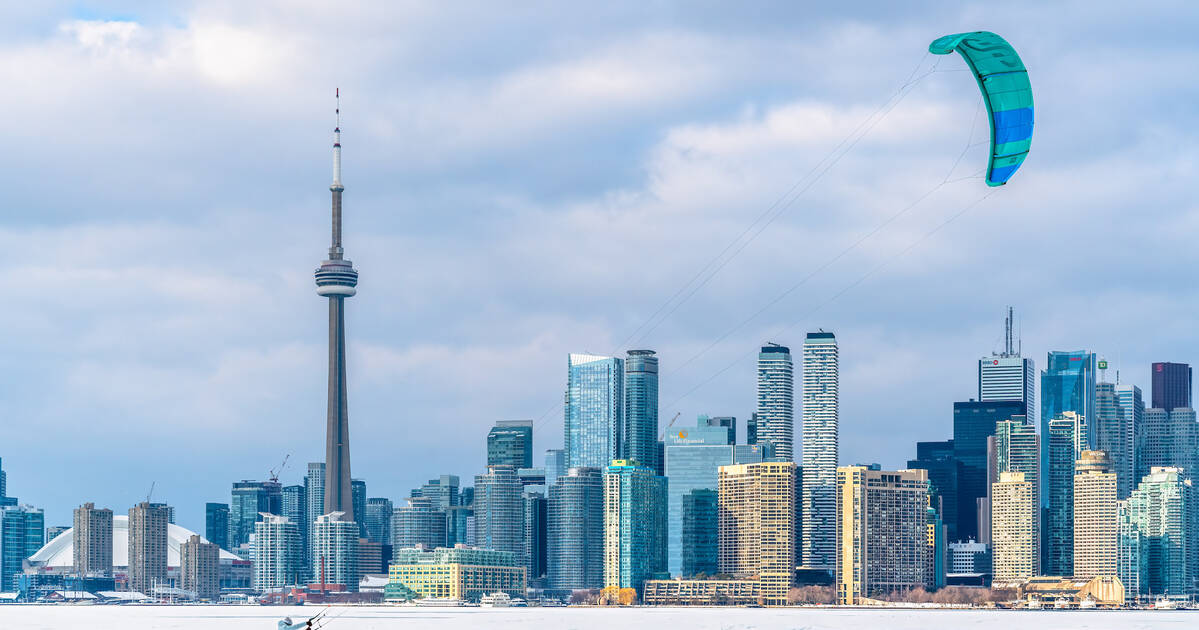 A woman has been soaring over Toronto frozen waterfront by snowkiting, and she wants to teach others how to do it too.

Laura Tombolini lives and works in downtown Toronto, and she wants to start up her own kiteboarding school to help advance the sport in our area.

She loves all kinds of outdoor sports, including surfing, snowboarding, paddleboarding and skating, and has skated on Toronto’s waterfront as well as doing snowkiting.

Snowkiting is basically kiteboarding, but on frozen water, attaching yourself to kites with 30-metre-long lines and letting them pull you.

Tombolini was first enthralled with kiteboarding seeing mind-blowing images doing it in tropical climates. While she’d never seen anyone do it on frozen waters here, she figured, why not?

It wasn’t long before she found herself hooked, driving hours to take lessons on frozen lakes, joining a group chat for local kiteboarders and what she calls “following the wind.”

It took Tombolini about a year and a half to learn to kiteboard/snowkite, balancing the commitment needed to improve with the versatility of the way she found she was able to practice year-round.

Someone has been snowkiting across the frozen Toronto Harbour – 📹 Laura Tombolini https://t.co/NSjRbtyhqr #Toronto pic.twitter.com/9Aez0j23T4

“You can basically do it all year if you are willing to bear the elements,” Tombolini tells blogTO.

“With the right gear you can kite in the water during the spring, summer and fall, and once winter hits you can snowkite on the frozen lakes with your skis or snowboard with the same kites and equipment.”

However, part of what makes snowkiting on the waterfront so magical is the rare opportunity to do it: conditions need to be perfect, so you might only end up with one “kiteable” day in a winter.

Otherwise, you need to head to more northern lakes or stick to kiteboarding on water during warm weather.

Tombolini mainly wants to change the perception that kiteboarding is an unattainable, expensive sport only accessible to those near oceans.

More than a new hobby, she’s found she’s gained a community and even therapeutic benefits from getting into kiteboarding, and wants to share that with others.

“I have seen and kited in so many magnificent sunrises and sunsets, and it has been my outlet for exercise and mental health,” says Tombolini.

“Not only is it great exercise, but it makes you feel euphoric after each session. For many of us, kiteboarding is therapeutic.”

Right now, she’s starting out on an individual basis with people who are interested in learning the sport, but has a long-term vision and goals for kiteboarding in Ontario of teaching, promoting safety, sharing locations and growing the community.

Some of Tombolini’s favourite spots to go kiteboarding are Cherry Beach, Woodbine Beach, Hanlan’s Point on the Toronto Island, the Scarborough Bluffs, Humber Bay, Port Credit and “countless” places on all the Great Lakes.

It’s not just her that’s waking up to the power of kiteboarding, also: it’s actually being introduced to the 2024 Paris Olympics.

“Imagine the possibilities of raising a future generation of kiteboarders and have Toronto be a central place for young kids to learn and train to compete and represent the country,” says Tombolini.