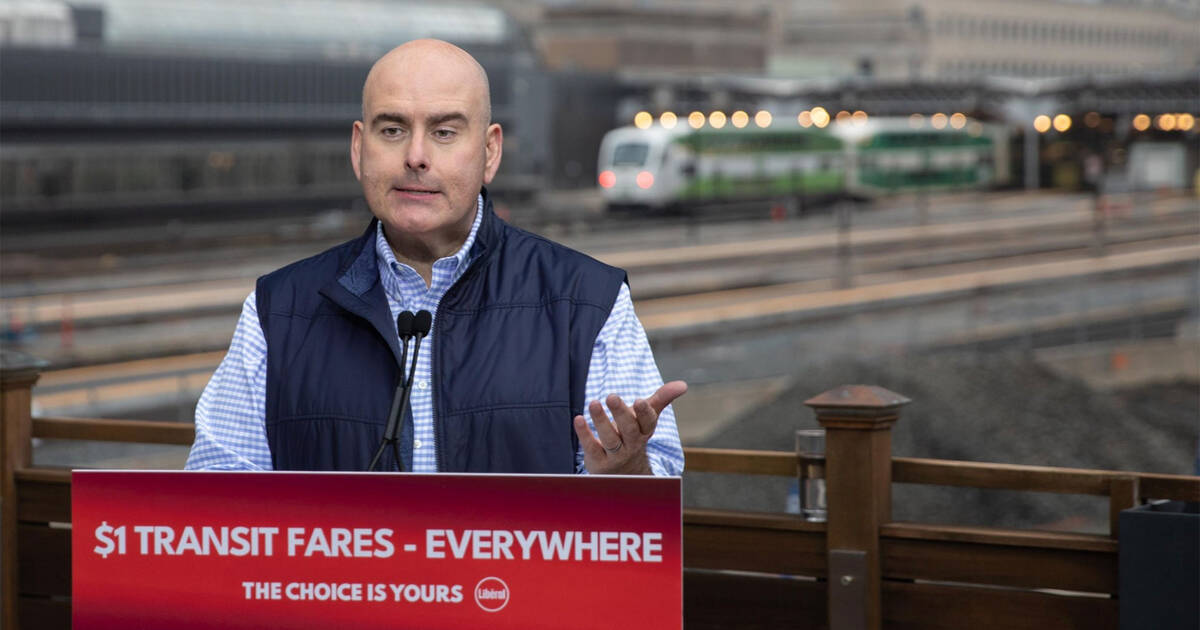 Ontario is preparing to vote in June 2022’s general election, and as expected, campaign season is coming with politicians hawking all sorts of crazy platform promises to win over voters before ballots are cast.

Here are just ten of the most mind-blowing, progressive, and expensive ideas that could become a reality should any one of the three major parties be elected this June.

Ontario PC Leader and current Premier Doug Ford promised the people (or folks, as he calls us) a “buck-a-beer” program as part of his 2018 election platform, a move Ontario Liberal Party leader Steven Del Duca referenced in his much more ambitious buck-a-ride pledge to voters.

Del Duca is promising to slash transit fares to $1 per ride on every transit line in Ontario, the party stating it will cut down on “gridlock and greenhouse gas emissions while making life more affordable for Ontario families.”

This is one gaining steam in a lot of progressive countries, and naturally, the two main parties identifying as progressive are both promising to at least experiment with a four-day workweek.

Hey @blogTO, four-day work weeks won’t be an April Fool’s joke if you vote @OntLiberal to get rid of Doug Ford on June 2. #onpoli https://t.co/nNnqeSugOr

The Liberals and NDP have both pledged to implement a four-day workweek pilot project if elected, a move shown to counterintuitively increase productivity while lightening the crushing mental health load everyone in the province has been dealing with for over two years.

OHIP is great and all, but if you’ve ever needed dental work done during lean times or lacking insurance, you know that not all medical care is covered in Ontario. The Ontario NDP wants to change that, at least for families that earn less than $90K per year, which also just so happens to be the core demographic of the provincial party’s voter base.

As proposed in 2018, NDP Leader Andrea Horwath touted that the plan would cover basic dental services ranging from basic checkups and cleanings to the more complicated work like fillings, root canals, and X-rays, along with work like braces and dentures required for non-cosmetic reasons.

Doug Ford’s PCs have rolled out a long list of promises, but front and centre is his party’s plan to spend almost $159 billion in the next decade (which assumes that his party would retain their grip on power into the 2030s) including transit, hospitals, and highways like the controversial 413. But more on that later.

We have a real plan to get Ontario moving!

Our plan will save commuters an hour each day! If you want to #GetItDone, the choice is clear. #ONPoli pic.twitter.com/iLjwF5S5F1

Steven Del Duca has pledged that the Liberals, if elected, will raise the provincial minimum wage to $16, a long-overdue raise for hundreds of thousands of people in Ontario, and more than the increase to $15 promised by Doug Ford’s PCs.

If elected, a Del Duca government would implement a regional living wage starting at $16 and provide 10 paid sick days for all Ontario workers.#onpoli pic.twitter.com/YpdI0LN3WP

In addition to fatter paycheques for minimum-wage employees, Del Duca’s plan for “economic dignity” promises to compensate businesses for employees taking up to ten paid sick days. Employees are currently entitled to up to three full days of job-protected unpaid sick leave every calendar year.

Not wanting to be outdone in progressive policy, the NDP is proposing even greater wage increases for Ontario residents eeking out an existence on minimum wage.

NEW – Andrea Horwath and the NDP pledge to raise the minimum wage to $20 an hour by 2026 if elected. pic.twitter.com/MPySHU3Oek

Andrea Horwath and co. want to gradually raise the minimum wage to $20 by 2026, with $1-an-hour increases annually. To top it off, they’re also pledging to legislate 10 permanent personal emergency leave days.

Liberals: No provincial HST on prepared foods under $20

Food is only getting more expensive, and to combat the effects of inflation on our grocery bills, the Liberals propose to remove the provincial portion of the HST on prepared foods under $20.

The last two years have been devastating for Ontario’s small businesses, especially our local restaurants. An @OntLiberal government will support local restaurants by removing the 8% provincial HST on prepared food under $20.#TheChoiceIsYours #onpoli https://t.co/2daH0UH9cL

An exemption from provincial HST currently exists for prepared foods up to $4, Del Duca promising coverage on items up to five times more expensive.

The PCs’ plan to construct the new Highway 413 has spurred controversy from the beginning; the new link spanning the Halton, Peel and York regions expected to run a price tag in the billions of dollars.

The PCs are championing this new highway as the two rival parties have balked at the proposal, and both would likely put an end to it if elected.

After Doug Ford’s PC government was elected in 2018, it quickly put an end to rental controls for new residential units, claiming the move was designed to help shore up the housing supply.

Andrea Horwath say’s that she will bring back rent controls that are very much needed.
I voted for doug ford in the last election and he said he wouldn’t remove rent controls BUT he did !!!
I think a change is definitely NEEDED and Andrea Horwath could be that change !

The NDP’s ‘Homes You Can Afford‘ plan claims that this change has forced tenants to face double-digit increases in their rent, something the party plans to reverse if elected by reinstating the policy designed to protect tenants.

Liberals: The end of handguns in Ontario

If the Liberals are elected in June, it would mean the end of legal handgun ownership in Ontario within the first year of Del Duca taking office.

A ban on the sale, possession, transport and storage of handguns would take effect across the province, though few details have been provided about exemptions. While the NDP agrees with the policy, they slammed the Liberals for not implementing it when they had the chance when last in office.